In an interview with the New York Times on Wednesday, after suggesting that he might not defend another member of the NATO alliance in the event of a Russian attack, Donald Trump was asked if he was paying close attention to what was happening in Turkey, following the failed coup attempt last week.

Trump replied that he had been impressed by the efforts of the Turkish people, who took to the streets to prevent the military from seizing power — but did so in a way that demonstrated his ignorance about a central facet of what took place last Friday night.

“They came out on the streets,” Trump said, according to the transcript, “and the army types didn’t want to drive over them like they did in Tiananmen Square when they sort of drived them over, and that was the end of that. Right? People said, ‘I’m not going to drive over people.’”

In this brief comment, Trump managed to be completely wrong about both what took place in Turkey last week, and the backstory to an iconic image from the 1989 protests in China.

In fact, while many reports from Turkey featured images of protesters standing in front of tanks — evoking the heroism of the anonymous “ 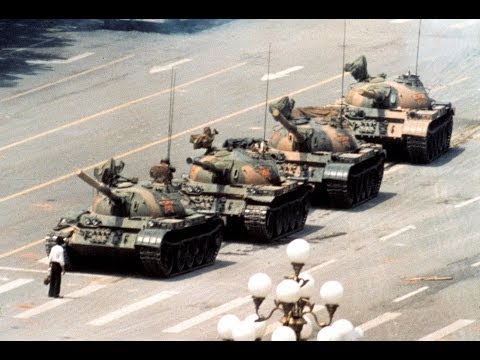 “>tank man” who tried to stop the military assault on Tiananmen Square three decades ago — there was also graphic visual evidence that tanks in some places ran down protesters and killed them.

Erdogan's office sent out video of moment tank rolls over cars on Istanbul bridge during #TurkeyCoup (via @tufeyli_)pic.twitter.com/pdjntMHIqB

Some of the deeply distressing video of protesters being crushed by tanks is nearly unwatchable, but such graphic images of civilians being

“>run over or torn apart were widely shared on social networks in Turkey, and helped fuel anger at the soldiers who carried out these atrocities.

It was revulsion at these massacres that prompted calls for Turkey to reintroduce the death penalty to deal with the guilty soldiers, and gave Erdogan popular support for the sweeping arrest of thousands accused of sympathizing with the coup plotters.

Trump’s lack of awareness about what took place in Turkey was matched by his confusion about what happened to the Chinese man who famously blocked the path of a column of tanks during the attack on pro-democracy protesters in Beijing ‘s Tiananmen Square on June 5, 1989.

As the New York Times reported the next day, after a few tense minutes, the photographers who captured the scene watched as the man was eventually

The lead tank came to a stop squarely on the yellow line in the street, and for a long moment the man just stood there. But then he leaped onto the tank. He bounded over the hood and leaned into the hatch, talking to the soldiers inside, perhaps pleading for them to abandon their vehicles.

After pacing back and forth on the hood of the tank, the man climbed down. A passing bicyclist stopped to chat with him. Then two other men ran into the street. One, in a dark shirt, had his hands up, as if to say, ”Don’t shoot.”

The two grabbed the man in the white shirt by the arms and hustled him off. And then the confrontation was over. The tanks were on their way again.

The post Donald Trump Crams Two Errors Into One Statement on Turkey appeared first on The Intercept.