When Donald J. Trump took office today, he declared that “we are transferring power from Washington, D.C. and giving it back to you, the American People.”

Documents obtained by The Intercept show exactly which people Trump is giving power to—the wealthiest sliver of American society. The incoming administration allocated at least a dozen of 183 seats on the inaugural platform to donors and fundraisers, who sat beside cabinet designees, senators, and President Trump’s immediate family. Another 49 seats for the pre-inaugural Friday morning church service, which Trump attended, were allocated to a billionaire fundraiser.

The documents, which come from the inauguration’s organizing committee, paint a markedly different picture than the one Trump presented during the campaign, that of a swashbuckling populist who would overturn “the rigged system” and drain Washington’s corrupt “swamp” of money-driven influence.

If these documents are any indication, Trump’s inner circle is shaping up to be even more plutocratic and insular than that of previous presidents.

The documents include a guest list for VIPs at a Friday morning church ceremony as well as seating behind Trump on the inaugural platform as he took the oath of office. These include megadonors like Sheldon Adelson, Carl Icahn, Steve Wynn, Woody Johnson, and Richard Lefrak—five billionaires with a combined net worth of more than $60 billion. Adelson was reportedly one of a very small number of people who shook hands with Trump following his inaugural address.

Most surprising, perhaps, a lesser-known billionaire, the real estate investor and major Trump fundraiser, Thomas Barrack, who appears to have won himself a favorable position in the new president’s camp. Barrack,”> 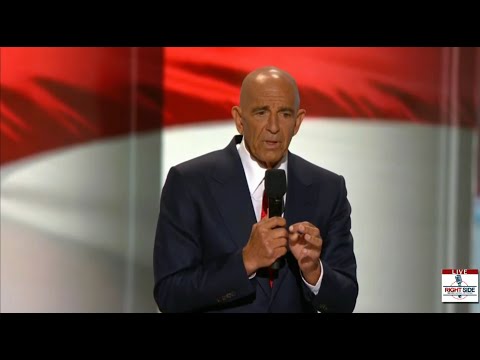 who spoke at the Republican convention this summer in Cleveland, was allocated 49 of the 259 seats for Friday morning’s service at St. John’s Episcopal Church, which was attended by Trump and his family—more seats than those allocated to all of the donors combined. Barrack and six of his guests had seats on the inaugural platform. Barrack’s personal seat allocation for the St. John’s service is roughly comparable to that of Vice President Mike Pence, who received 52 church seats and 42 platform seats for “friends and family.”

One of Trump’s own “friends and family” is Peter Thiel, worth more than $2 billion, who founded the data-mining company Palantir Technologies. Thiel is listed as “TBD”—to be determined—for the church service and had one seat allocation on the inaugural platform. It is unclear whether Thiel actually attended.

In 2013, the New York Times made an incomplete chart showing many of the attendees who were granted platform seats for Barack Obama’s second inaugural. Only two of those among the platform crowd who the Times was able to identify were megadonors—Chris Hughes, the Facebook co-founder, and his husband Sean Eldridge.

A spokesperson for the Trump transition team did not immediately respond to requests by phone and email for comment.

Top photo: President Donald Trump waves on the West Front of the U.S. Capitol on Jan. 20, 2017 in Washington.

The post Internal List Shows President Trump Was Sworn In Next To His VIP Donors appeared first on The Intercept.