Fears of a victory for the extreme Right in the French presidential election appeared to recede further on Friday, as the campaign drew to a close with Marine Le Pen of the National Front trailing Emmanuel Macron, the former economy minister, by more than 20 points in the polls, just two days before the vote.

Both candidates finished their campaigns in cathedrals, celebrating France’s history and cultural patrimony and, perhaps, hoping to win over Catholic conservatives who still make up a sizable bloc of voters.

Le Pen’s visit to the cathedral at Reims in the northeast was considerably more contentious than Macron’s in the southern city of Rodez. The nationalist candidate, who has stoked anti-European sentiments with her attacks on the European Union and snide claim that Macron would be subservient to Angela Merkel, the German chancellor, was booed and jeered by hundreds of protesters who gathered outside the cathedral, the site of a famous moment of Franco-German reconciliation in the 1960s.

Outside the cathedral’s front door, protesters chanted anti-fascist slogans, and mocked Le Pen for refusing an order to return EU funds she was found to have misused to pay aides.

The candidate was eventually forced to flee through a side door, to loud boos and shouts against her nationalist party.

Among those displeased about Le Pen’s surprise visit was the mayor of Reims, Arnaud Robinet, a member of the mainstream center-right Republican party. Beforehand, Robinet suggested on Twitter that Le Pen would be wasting her time campaigning in a city of peace that had turned towards Europe, and was a symbol of the postwar reconciliation embodied in the EU.

In 1962, President Charles de Gaulle of France and German Chancellor Konrad Adenauer attended a mass for peace at Reims Cathedral.

Afterward, the mayor sarcastically thanked Le Pen for the sad spectacle she provoked by her visit.

Le Pen’s poor showing in the campaign has come despite the best efforts of Trump supporting accounts on social networks, which have pushed rumors and innuendo about Macron with increasing desperation in the past week. As Samuel Laurent of Le Monde reports, a final spate of tweets used the hashtag #MacronGate, which did little to disguise their English-language origin.

#MacronGate this guy in France is just as corrupt @HillaryClinton lock him up. #MFGA………

To the chagrin of the American alt-right, an endorsement of Macron from Trump’s predecessor, former President Barack Obama, was widely shared on social networks in France.

Le Pen trails by enough in the polls that the attention of many observers has turned to the next stage of France’s election season: the legislative elections that follow in June, which even a victorious Macron might face an uphill battle to win, give that his new party has so far announced just 14 candidates for 577 seats.

Some observers also fear that Macron’s wide lead in the polls could encourage lower turnout, which would lower the bar for a surprise Le Pen victory.

Among those urging French voters, whatever their politics, to vote for Macron to keep Le Pen out, is Marcel Ophuls, the veteran filmmaker whose 1969 documentary, “The Sorrow and the Pity,” revealed the extent of wartime French collaboration with the Nazis.

Speaking to The Intercept by phone from his home in Southern France this week, Ophuls, 89, cautioned his fellow French citizens against forgetting history that is, for some, still within living memory.

Le Pen “is one of the most intelligent politicians in France,” Ophuls said. “She’s extremely clever and, of course, she is a great danger not only to France but to Europe and to the whole world.”

“One should never forget that the man who my father always called, ‘the late Chancellor of the Reich’ — that was to remind people, to remind himself and to remind others — that the Fuhrer was democratically elected,” Ophuls added. “That’s very important to remember if you have any sense of history.”

“Marine Le Pen, whatever she says to dissociate herself from her father — which is all very clever, to play on people’s fears — is much more dangerous to our future, what is left of our future, than poor Donald Trump, who’s probably going to get impeached.”

Ophuls, whose lost masterpiece about the Nuremberg trials, “ 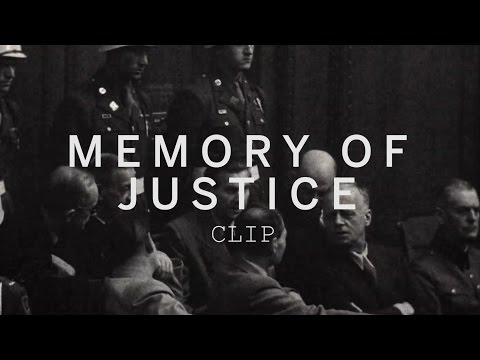 “>The Memory of Justice,” has just been restored and released by HBO, added that he was impressed by Macron’s willingness to acknowledge and confront what he called “crimes against humanity” committed by France during its colonization of Algeria.

Le Pen, whose base of support includes the former colonists expelled from Algeria in the 1960s, and their families, has attacked Macron for his remarks, made during a visit to Algeria last year.

Politically speaking, Ophuls said of Macron’s comment, “it was a mistake, but it was an emotional mistake, because he is outraged about the crimes of war that France committed in its former colonies — and that is very honorable, it’s an honorable mistake.”

By contrast, Ophuls observed, when Le Pen recently followed her father’s lead in excusing the crimes of Vichy France — specifically the notorious rounding up of French Jews who were deported to the death camps in 1942 — it was portrayed as a gaffe, but was, in fact, an intentional effort to send a signal to her anti-Semitic base that in her reading of history, France was blameless.

The post Marine Le Pen Flees Hecklers as Her Odds of Victory Shrink in France appeared first on The Intercept.