In a statement released on Tuesday, Philippine President Rodrigo Duterte said that he was sorry — not for calling President Barack Obama a “son of a whore,” but that “it came across as a personal attack on the U.S. president.”

The contorted apology, read to reporters at the Association of Southeast Asian Nations forum in Laos by Duterte’s spokesman, Ernie Abella, came after Obama responded to the slur by canceling a meeting with the new leader that had been scheduled for Tuesday.

Duterte, whose first months in office have been marked by nearly 3,000 killings, in a campaign of extrajudicial assassinations of suspected drug dealers and addicts carried out by the police and death squads, launched into

?t=6m58s”>a profanity-laced tirade against Obama on Monday when asked by reporters how he would respond to criticism of the killing spree from the American president.

Later on Tuesday, his press office seemed to back away from the apology, by promoting a Filipina blogger’s claim that the president’s use of the Tagalog slur “putang ina,” which means “son of a whore” or “son of a bitch,” had been directed not at Obama but at the reporter whose question set off his 12-minute rant. (Although the blog post cited as evidence in support of this claim was described by the press office as the analysis of “an independent group” in the United States, it was, in fact, written by a woman living in the Philippines who can be hired to write blog posts and e-books for corporate clients.)

However, an official transcript of the press conference, and video of the complete exchange posted on Facebook by the president’s aides, makes it quite clear that Duterte’s scorn was aimed squarely at Obama — in part because he also demanded an apology from the U.S. for the killing of Filipino insurgents during the brutal American occupation of the Philippines a century ago.

In an address last week,

?t=55s”>Duterte argued that the U.S. had slaughtered so many Filipino insurgents in the early years of the 20th century that American officials today have no right to complain about the killing of “two or three” dealers of shabu, a cheap and highly addictive form of methamphetamine that is smoked across the Philippines.

According to the police, however, the scale of the killing since Duterte took office 10 weeks ago is far higher. The updated death toll, as of Tuesday, is 2,927, including bystanders as young as four years old caught in the crossfire. Police officers have killed 1,033 people in anti-drug operations since Duterte was sworn into office on June 30, officials told Agence France-Presse. Another 1,894 killings are classified as “deaths under investigation,” a term human rights activists in the Philippines say is a euphemism for extrajudicial killings carried out by the security forces and hired assassins.

The brutal methods employed seem to echo those used in Davao, the southern city where Duterte served as mayor for two decades, and Human Rights Watch documented the operation of apparently state-sanctioned death squads that killed “hundreds of street children, petty criminals, and petty drug dealers.”

In 2009, Human Rights Watch reported that in Davao, “The assailants usually arrive in twos or threes on a motorcycle without a license plate. They wear baseball caps and buttoned shirts or jackets, apparently to conceal their weapons underneath.” Last week, BBC News broadcast an interview with a female assassin who rides on the back of a motorcycle driven by her husband, and says she has carried out five gangland-style hits on suspected drug dealers since Duterte was elected.

The police have defended the spike in killings by claiming that officers were “just defending themselves,” from “drug-crazed” gunmen.

Despite Dutere’s promise during the election campaign that he would eradicate crime by killing 100,000 criminals during his presidency, Ronald dela Rosa, his new national police chief, insists that the unexplained deaths are the work of drug syndicates at war with one other, not extrajudicial killings by vigilantes working with government approval.

There is some logic to Duterte spokesman’s claim that his boss did not think of his slur about Obama as particularly personal. The Philippine President has used the same term, and worse, to respond to any and all critics of his shoot-to-kill policy. After his election in May, Duterte told reporters that they too could be killed. “Just because you’re a journalist you are not exempted from assassination, if you’re a son of a bitch,” he said. After two United Nations rights experts called those comments incitement, Duterte said: “Fuck you, UN … shut up, all of you.”

“Maybe we’ll just have to decide to separate from the United Nations,” he added later. “If you are that disrespectful, son of a whore, then I will just leave you.”

Duterte also called the Pope “a son of a whore” for causing traffic problems in Manila last year, and said the U.S. ambassador to the Philippines, Philip Goldberg, was a “gay son of a whore,” for criticizing him during the election campaign when the candidate said that he regretted not getting the chance to rape an Australian missionary before she was killed during a prison riot.

Asked last month by Mehdi Hasan of Al Jazeera English if his job was not “impossible,” Duterte’s spokesman Ernie Abella 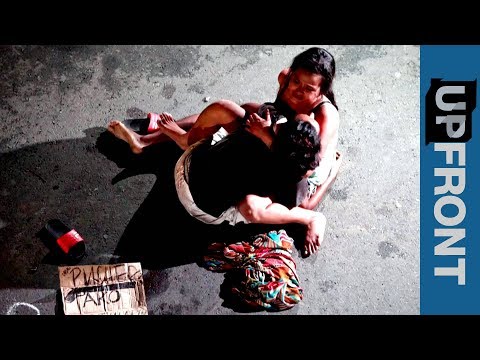 “>dismissed concerns about his boss’s crude speech. “There is a culture clash in here, but I understand where he’s coming from because it’s a particular subculture — the Cebuano subculture speaks in a very rough kind of humor,” he said, referring to the language used in the southern Philippines.

“That’s why my task is to be able to interpret him, and act as a conduit and bring out the true intention of the president,” he added.

Another sign of just how difficult a job that is came late on Monday at the ASEAN Summit. Just as the Filipino president’s press office prepared to release a pamphlet defending his bloody drug war — “We are not butchers,” it read — Duterte took the stage and promised to take revenge on Islamist militants who struck his home city by eating them.

“They will pay. When the time comes, I will eat you in front of people,” Duterte told a group of Filipinos in Laos. “I will really carve your torso open. Give me vinegar and salt and I will eat you. I’m not kidding.”

The post Philippine President Sorry, Not Sorry He Cursed Obama for Criticism of His Killing Spree appeared first on The Intercept.