“Will you continue to use cluster weapons in Yemen?” we asked Prince Abdullah Al-Saud, Saudi Arabia’s ambassador to the United States.

“This is like the question, ‘Will you stop beating your wife?’” Al-Saud responded”> 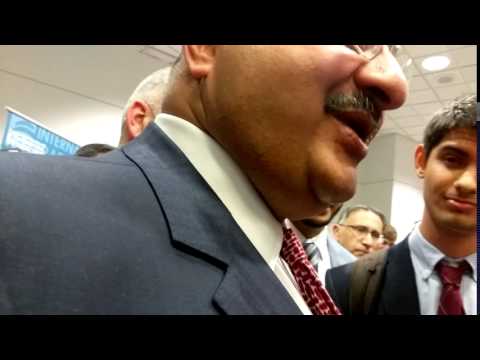 We continued to ask with the same question, and the ambassador grew tired of our persistence. “You are political operators!” he accused. “I’m not a politician.”

The Saudi-led coalition bombing Yemen had “righteousness, legitimacy, a lot of support,” and would keep bombing “no matter what it takes,” he told the audience, which included U.S. military officials as well as defense contractors and oil executives.

“If anyone attacks human lives, and disturbs the border, in whatever region, we’re going to continue hitting them, no matter what,” said Al-Saud.

“Anyone who wants to solve the Yemen problem should understand who is making all the problems,” he said, ducking Saudi responsibility for the suffering in Yemen. “We will not at all allow anything to develop in the future like this no matter what it takes.”

Saudi Arabia has since been responsible for the majority of the 10,000 deaths in the conflict, according to the U.N. The coalition has repeatedly targeted civilian sites, including homes, farms, factories, markets, hospitals, and children’s schools.

When asked by The Intercept why Saudi Arabia continued to strike civilian targets, the ambassador responded, “We have no interests in doing these things. If it was just a military victory without care for human life, we would have bombed Saada [a Houthi stronghold].”

In May, a spokesman for the Saudi-led coalition announced on Saudi state television that the entire province of Saada was a military target, and warned the residents to leave.

Eli Massey of In These Times asked the ambassador if he disputes the fact that most civilian casualties in Yemen come from the Kingdom’s airstrikes. “You are really, you’re a heckler. You’re a politician,” he said, dismissing Massey. When The Intercept repeated Massey’s question, he responded “Yes! Yes!”  When we asked him to prove his claim, he grew more dismissive. “You are a political operative,” he said.

Despite the catastrophic humanitarian toll of the Saudi coalition bombing campaign, the U.S. military has continued to play a supporting role, providing targeting intelligence, signing off on $20 billion in weapons shipments, and flying refueling missions for Saudi aircraft.

After a year and a half of war, the Obama administration has come under increasing pressure from Congress and human rights groups to cut off its support for the coalition. After Saudi Arabia bombed a funeral in Sana’a earlier this month, killing 140 people and wounding more than 500, the White House initiated a review of its support, and threatened to “adjust our support so as to better align with U.S. principles, values and interests.” It is unclear when the review will be completed.

Ahmed Awad Bin Mubarak, the ambassador to the United States from Yemen’s exiled government, also told the audience that Saudi Arabia was not to blame for the suffering in Yemen. “Yemen is suffering from all sorts of serious problems – all of which have been caused by the irresponsible actions of Houthi rebels,” Mubarak said.

Top photo: Yemenis stand on a rooftop looking at smoke billows from a building following an air strike reportedly carried out by the Saudi-led coalition in Sanaa, Yemen, on Sept. 25, 2016.

The post Saudi Ambassador to the U.S. Vows to Keep Hitting Yemen, “No Matter What” appeared first on The Intercept.