An appellate court in Baton Rouge ruled Thursday that a raid on a police officer’s house in search of the blogger who had accused the sheriff of corruption was unconstitutional.

The Louisiana First Circuit Court of Appeals argued that Sheriff Jerry Larpenter’s investigation into the blog ExposeDAT had flawed rationale: the alleged defamation was not actually a crime as applied to a public official.

The unanimous ruling from the three-judge panel comes after police officer Wayne Anderson and his wife Jennifer Anderson were denied assistance in local and federal court.

“I love it when justice is tangible,” Jerri Smitko, one of the Andersons’ laywers, told The Intercept.

“With that piece of paper it says that what they did was unconstitutional — that’s a great feeling because you’re holding it in your hand and it’s vindication for people that they intended to oppress,” she added.

The raid was sparked by the sheriff’s investigation into who was behind the anonymous blog that accused local officials, including him, of corruption and fraud. Through a blog and a Facebook page called “John Turner,” ExposeDAT used public records to show conflicts of interest.

The sheriff sought warrants when Tony Alford, a local business owner, filed a criminal complaint about the blog. On August 2, Larpenter and his deputies raided the Andersons’ house after they traced the IP address of the John Turner Facebook page through a warrant to AT&T.

The information AT&T provided, according to an affidavit, gave the sheriff an address and a name: Wayne Anderson.

The court found that the raid on the Andersons’ house was unjustified. “Anthony Alford, the supposed victim, is president of the Terrebonne Parish Levee and Conservation Board of Louisiana, and a public official,” the decision read. “Consequently, the search warrant lacks probable cause because the conduct complained of is not a criminally actionable offense.”

The ruling said that when applied to public officials, like Alford, the criminal defamation statute is unconstitutional.

Smitko said she now plans to go to the Terrebonne Parish Court and retrieve Anderson and his family’s electronic devices.

“I certainly believe that my clients have been damaged by this unconstitutional action,” Smitko said. “They’ve been deprived of their rights, and I anticipate that we’ll be meeting shortly to discuss pursuing a claim for damages against the parties involved.”

The electronic devices were being held for an investigation that was in the hands of the Louisiana attorney general. Now, the case is closed.

This week’s ruling comes after a tumultuous month of legal back and forth.

On August 5, following the raid, a post appeared on John Turner’s Facebook page. “Rumors of my demise have been greatly exaggerated,” he wrote, telling readers to “stay tuned.”

That same day, Judge Randall Bethancourt — the judge who signed the warrant — ruled that it was within his jurisdiction to allow the search.

Anderson’s attorneys disagreed with the ruling but were initially unsuccessful in seeking relief. Arguing that their First-, Fourth-, and 14th-Amendment rights had been violated, Anderson and his wife sought intervention in federal court., asking for a temporary restraining order against Larpenter.

“The judge could very well have erred in concluding that probable cause existed to believe that a crime was committed. But unless Larpenter lied to obtain the warrant, an error of law is not attributable to him,” Zainey wrote.

“I’m just very dismayed and actually aghast that this happened in the first place, and I am hopeful that our state appellate court will right the wrong,” Smitko told The Intercept after Zainey’s ruling.

While there have not been any new blog posts, the writer has taken to Facebook. On August 15, in a post that his since been taken down, the pseudonymous John Turner wrote: “Why is Sheriff Larpenter so angry about people exposing facts that are part of the public record?”

He went on to write a post similar in nature to his previous articles, outlining business ties among Parish officials. Over the month of August, Larpenter had publicly defended his position. “They need to upgrade [criminal defamation] to a felony,” he recently said on local television station HTV10.

“The media come and all the different outlets, even our local media, wrote unsatisfactory accusations about me like, ‘Oh, they got freedom of speech. They can say what they want.’ Well that’s not true,” he said”> 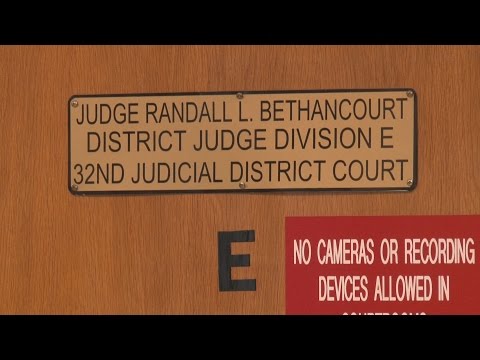 After the court of appeals decision, Larpenter told Houma Today, “we have to live with that ruling.”

On August 15, Larpenter was supposed to be honored for his service to the community by being inducted into the Louisiana Justice Hall of Fame. The ceremony was rescheduled because of flooding.

The post Sheriff’s Raid to Find Blogger Who Criticized Him Was Unconstitutional, Court Rules appeared first on The Intercept.