Peter Thiel bankrolled the lawsuit that destroyed Gawker Media earlier this year, putting him in the vanguard of the wave of press intimidation that his chosen presidential candidate, Donald Trump, is also riding. 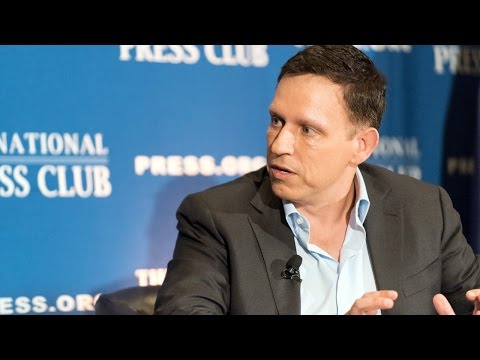 at the National Press Club on Monday, was highly anticipated.

But welcoming Thiel to what he called the “lion’s den,” Press Club president Thomas Burr did not take an adversarial position, instead asking Thiel softball questions and leaving numerous inaccurate statements uncorrected. Reporters had no opportunity to independently ask Thiel questions; instead, Burr chose them from index cards submitted online.

Thiel is, as my colleague Sam Biddle wrote previously, “dangerous and fascinating.” The Paypal co-founder has many eccentric beliefs and projects, including a desire for blood transfusions from young people as a way to stave off death. Mark Zuckerburg recently defended Thiel’s role on the Facebook board as “diversity.”

Among the questions:
•    Do you see this election as anything more than a contest to see who will be the next captain of the Titanic?
•    Has your company suffered any blowback because of your position?
•    In your RNC convention speech you said, “where I work in Silicon Valley, it’s hard to see where America has gone wrong.” Do you think Silicon Valley understands America, and what’s that source of disconnect?
•    Was the timing of your donation to the Trump campaign in any way related to the revelation of the Access Hollywood tape about Mr. Trump? (Thiel already said that Trump’s comments about women were “clearly offensive and inappropriate”)
•    Do you think that what happened to Gawker could happen to other news organizations?
•    What do you think of the problems with the news media, and what do you think that means for society? And what would you do to fix them?
•    As a libertarian, what do you think are the greatest threats to your freedom today, and what do you think can help increase people’s individual freedoms?

Thiel called Gawker a “singularly sociopathic bully,” and added, “these were not journalists.” Burr offered no rebuttal. He could have mentioned, for example, that Gawker was the first site to report Hillary Clinton’s use of emails from a non-goverment account, as Gizmodo Media Group Executive Editor John Cook noted Monday.

“One class of people [Gawker] especially hated were other reporters, other writers. And in the sort of prehistory as we were building up this case there were a few people I talked to about it, and some of the people who encouraged me to keep going were some of my friends in the media, because they knew how much Gawker had actually specifically targeted more successful writers and reporters over the years,” Thiel said. Burr didn’t ask for examples.

Thiel said he is not involved in other lawsuits against media organizations at this time.

Disclosure: First Look Media Works, the parent organization of The Intercept, sought to organize amicus support for Gawker in its legal battle with Hogan.

The post Gawker-Killer Peter Thiel Gets Softballs From the National Press Club appeared first on The Intercept.